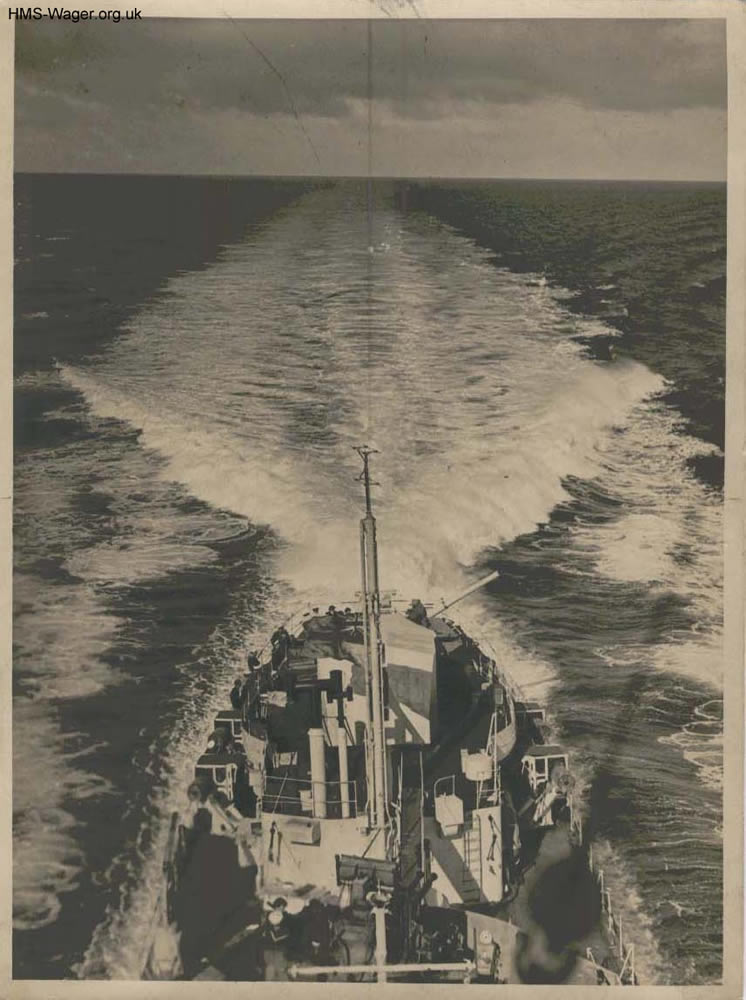 Another shot of HMS Wager at full speed in New Zealand waters in July 1945; she is making perhaps 30 knots.

In the foreground, just to the right of the sailor with his back to the camera (wearing his traditional white-topped round cap and blue jean collar), a twin-barrelled AA Oerlikon gun is trained over the port quarter.
A narrow walkway leads on to X gun turret platform, and the gun barrel itself is trained directly for’d, towards the camera, and is thus hidden by the mast, such that the gun barrel’s shadow is cast at an angle of 45 degrees on the angled front of the turret, just below the shadow cast by the ship’s ensign. The White Ensign itself flies from the after mast, fitted some time after the ship was built, with its radar aerial atop. Y gun turret is trained to port and the single 4.7-inch barrel is clear at an angle of 45 degrees.
Clearly visible are the “Charley Nobles” – two vertical pipes rising from the gun platform, one larger than the other, both with a black H-shaped pipe at the top. These are the funnel exhausts from the wardroom galley, which was located inside the after part of the superstructure under X turret; the H shape at the top, open at all four legs of the H, allowed any seawater to escape rather than be taken back inside the ship.
Four stowages/throwers for depth charges are by the railings either side of X turret (and further aft), two on the port side and two on the starboard side.
To give an idea of scale, the rungs of the ladder giving access to the top of X turret’s platform are about one foot apart. Inside the superstructure, occupying the corner directly behind the ladder, is the Engineer’s Office, the place of work of Stoker Ted Elwick, the Engineer Officer’s Writer.