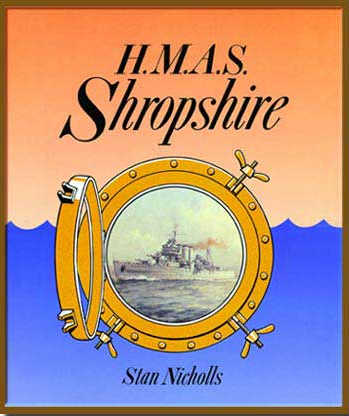 HMAS Shropshire by Stan Nicholls Published by the Naval Historical Society of Australia December 1989. You can read the book on the web at the HMAS Shropshire E-book.

I am delighted to provide a foreword for this book, but I am afraid that my connection with HMAS Shropshire is very tenuous, to say the least. During the war I was, as the author puts it, ‘an obscure Greek Prince’ who had joined the Royal Navy as a cadet in 1939. My first appointment as a Midshipman was to the battleship HMS Ramillies in January 1940. I joined her in Colombo as she was on her way to Australia to escort the first contingent of the Australian Expeditionary Force to the Middle East.
Greece was still neutral at that time, and as Ramillies was to continue into the Mediterranean, it was considered prudent that I should remain out of the active ‘war zone’ for the time being. Italy invaded Greece a few months later and I was immediately sent to Alexandria to join the battleship Valiant. It was during the ‘time being’ that I first served in HMS Kent and then in HMS Shropshire on the East Indies Station. We spent a lot of time at sea, either searching or escorting, but otherwise things were fairly quiet.
The next time I was to see Shropshire was in Tokyo Bay in September 1945. I had come back to Australia with the British Pacific Fleet as First Lieutenant of the Fleet Destroyer HMS Whelp. As luck would have it, Whelp and Wager were chosen to escort Admiral Sir Bruce Fraser, the Commander-in-Chief BPF, in his Flagship HMS Duke of York to pay a call on Admiral Nimitz, Commander-in-Chief of the Pacific Ocean area, in Guam. It was while we were there that the atomic bombs were dropped on Japan. The main Allied Fleets were already at sea and, together with Admiral Halsey in his flagship, USS Missouri, we sailed to join the fleets until the Japanese finally agreed to end hostilities.
By another piece of luck it was decided that, as soon as it was known that the Japanese had given in, the two flagships, Missouri and Duke of York escorted by four US and two British destroyers, should go straight to Tokyo in advance of the rest of the fleets. It was a dramatic and deeply moving moment as this small group of ships sailed quietly into the very heart of the Japanese Empire, which had been the all-conquering and apparently invincible enemy for so long. A few days later the Allied fleets sailed into the wide waters of Tokyo Bay to witness the official surrender by the Japanese and the end of the Second World War.
This book tells the dramatic story of what happened to Shropshire from soon after I left her in Colombo until I saw her again in Tokyo five years later. It is quite a story.