Able Seaman Len Ackroyd had this recollection after seeing the below photo of the pilot being transferred back to the aircraft carrier HMS Indomitable by breeches buoy: 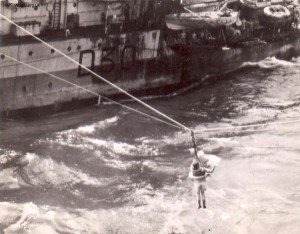 When returning pilots to any of the carriers a message would be sent to whoever was in charge at the time that they couldn’t have the pilot back unless they sent a couple of sacks of bread and bags of sugar in return; treats really for the sailors. There was never any bread on board the Wager whilst at sea as there was no bakery; however, it was baked daily on the carriers.

When the planes took off for operations from the carriers it was Wager’s job, as with all escort destroyers, to pick up any downed pilots or ship survivors. One young pilot’s plane was shot down into the sea very close to the Wager and remained afloat. The boy tried to throw a suitcase out of the cockpit first, which he managed to do, but the plane went down before he had another chance to get out so he drowned. It was terrible to see. We did recover the suitcase and found it full of clothes.